You might be aware, or you might not, it’s robot season.  Robot season starts at the beginning of January and goes through April-ish.  The worst part of robot season is from January to mid-February. That’s when the robot actually gets built.  During that time, Ava all but lives alone.  The rest of the family is out until all hours building the robot. 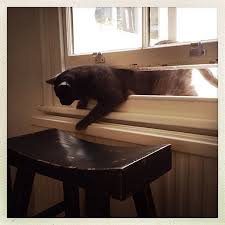 So, it’s her and the three cats.  Ava has never lived alone and she doesn’t like it.  Not at all. The purrballs do not like it either because she focuses all of her attention on them. It’s not unheard for them to call up Amy and ask to go live at her house until build season is over.

While Ava is left to her own devices at home, she writes.  Her latest unfinished novel needed to have a very critical fact researched. She needed to know what was the least amount of inches a window could be open for a one-year-old lioness to climb out of.

In typical Ava fashion, she rounded up one of her kitties and attempted to measure his head after having read that would be the part that would have to get through – the rest of the cat is fairly squishable.

Milo – the kitty she captured first because he’s a little on the chubby side – was not at all excited to have his head measured. He gave her the “Are you an idiot?” look.  After a brief struggle, the measurement was taken.  Next, Ava spent some time rigging up a two shelf contraption for him to try to crawl through.  She explained to him this was to simulate an open window.  He

See – he has helpful kitties

gave her the “What the F is wrong with you? Someone could get hurt. You’re not in construction like dad” look.  She made him do it anyway, explaining that everyone in the family had to do their share – after all, he did want to continue to be housed and fed, didn’t he?

Well, the head measurement thing worked – he made it through a three-inch opening several times before he called the authorities.  Based on a top secret mathematical formula – we now know that a one year old lioness should be able to escape through a window open about ten inches.

Just to be on the safe side – Ava and Amy have decided to contact Kevin Richardson AKA The Lion Whisperer and see what he thinks.  We’ll let you know if we’re right.