And this is why I’m suing Kellogg’s

The other night around 2am, while my family was sleeping soundly, I was hungry. It had been quite some time since dinner and my tummy was growling. I decided that I wanted some cereal. It’s one of my favorite foods. Just love me some cereal.

I filled up a bowl with Frosted Mini-Wheats and went out to the living room to watch television. Things were going along just fine when suddenly I was choking on a tiny sliver of wheat. A mini wheat, if you will. I have no idea how 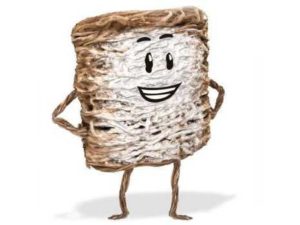 this happened. One minute, chew chew chew and the next GAH! I managed to get to the point where I was coughing, which any medical professional will tell you means that I’m not actually choking anymore, but doesn’t do a lot towards making you feel better when you can’t seem to get a full breath.

So here I was, slowing dying in the living room, coughing so hard I actually peed a little, and the whole time I’m trying to defend my bowl of deadly cereal and milk from the damn cat.

I thought to myself, between desperate hacking, that there was very little dignity in death by cereal. I also figured it was apt that I’d die from eating something I had no business eating. I considered that I should try to crawl down the hall to wake up My Honey to let him know that I needed assistance, except that I’d have to put down my bowl and then Quentin would get the milk for sure.

This was how my family would find me in the morning, dead on the floor in the living room, a tiny fleck of wheat lodged in my throat, and dairy-free bowl on the floor by a contented cat with milk breath.

Clearly I lived to tell the tale. As I see it, the moral of the story is: Don’t eat cereal by yourself.

My Honey says it’s: Go to bed at a normal time.

My guess is that neither of these things are actually going to happen.