Don’t mess with the civil service

Remember how I traded in Dave Durango for Leanidas of the 300? That was back in November.

My love affair with Lea progresses nicely. She’s beautiful and she smells good and I love her sound system.

Sometime in January, I got a letter from the Department of Motor Vehicles claiming that they didn’t have any insurance on record for Lea. I followed the instructions and sent them my insurance card.

I assumed all was well.

Typical line a the DMV

implied that I would live to regret my apparent disregard for their policies. Then they demanded I send proof of insurance along with $50 ransom.

I called the number on the letter and sat on hold for 45 minutes. 45 long minutes that didn’t even include hold music. Apparently, the DMV doesn’t feel inclined to tell you that your call is very important to them. I guess we should find some honor in the fact that they won’t lie to you just to try to make you feel better.

I told the woman who finally came on the line to help me that I’d already sent the insurance card. Additionally, I told her that I didn’t appreciate Lea’s registration being suspended. I confided that I enjoyed speeding and this whole registration business was cramping my style. Lastly, I told her I was not giving them $50.

She suggested that I could try the computer system and download the insurance info again. I scoffed. That worked out so well for me last time. 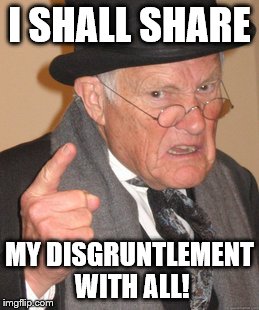 She played her ace by advising that I come down to the office and wait in line.  I told her that, actually, my father didn’t have anything to do these days except wait around in lines and complain bitterly to anyone who would listen. I informed her that he was often disgruntled and, should we give him a good reason, he could apply this disgruntledness to just about any cause. I’d be willing to pack him a sandwich and send him down there if she thought that would be a good course of action.

I want you to know that the employees of the DMV are not intimidated by threats – certainly not those of grumpy old men. Apparently, they breed them down there.

I uploaded my insurance info again via their website. I received confirmation that Lea’s registration has been cleared. I did not send $50 because I won’t cave in to terrorist threats.

I sped like a fully registered idiot the whole way home.