Welcome back! Well, we guess we should welcome ourselves back. We took a break. We’d been at this blog for YEARS and we were just exhausted. And sometimes you’re too busy and/or weary to be funny for other people, ya know? To be honest, and we feel really bad about this actually, we didn’t do much writing at all. We’re feeling much better now, though, and we’re committed to being funny for an audience again. We thought we’d start back with the Five Favorite Things because that was one of our little pet features. The Amy and Ava Show is back for a long engagement. Remember, leave comments to 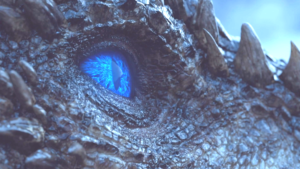 1. Blue-Eyed dragons. Are you all fans of Game of Thrones? If you aren’t, we don’t know how you manage to avoid it. How can you even follow conversations on Monday mornings? They’re all full of conspiracy theories and manic ravings about incest and murder and white zombies. This show is so fabulous — we can barely contain ourselves. Did we ever tell you about the time we almost got arrested for stalking George R R Martin? It involved the bribe of a Bundt cake. All the best shenanigans involve cake, and we figured George looked like a fellow who’d appreciate two funny and charming women showing up at his house with cake. Maybe one of these days we’ll give you the full scoop. Back to the point. We want a blue-eyed dragon who breathes blue ice-fire. It would come in remarkably handy when one of our nemeses needs a reminder of just exactly who they’re dealing with. Hey – you

watchers of the Song of Ice and Fire – what’s your theory on where the hell the Night King got those giant chains to pull that dragon out with. Is there a Home Depot on the other side of the wall or what?

2. We all deserve the shake. Ava was fetching herself some lunch yesterday – alone – because now she and Amylynn work on opposite sides of town and never see each other. This is a tragedy of epic proportions and the universe is all the lessor for it. However, there’s also probably fewer employment opportunities for wait staff and counter help now that they’re not together torturing people as a hobby thus forcing service people to quit their jobs and remand themselves to solitary occupations such as nuns and hermits. While ordering at the counter she over heard this pearl of wisdom from an older lady talking to her granddaughters. “I’m 80-years-old. I’m getting the shake. You’re teenagers. Get the shake.” This woman is our 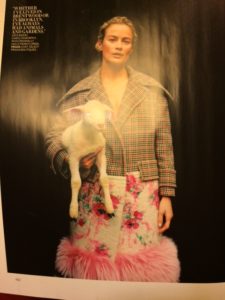 hero. This is also why we’ll always be fat. No matter what your situation, it’ll probably be made better with a shake.

3. September Vogue. Specifically page 662. What the hell is this bullshit? This, dear readers, is the embodiment of the Emperor Has No Clothes allegory. It’s literally a winter coat sewed together with a house muumuu and some fake pink fur. Who would wear this nonsense? Where would you wear it? Like we guess while running around in the fields of Yorkshire in the dead of winter trying to catch your wayward sheep. Amylynn swore she wouldn’t ever wear that ridiculous getup even if offered a lamb as a bribe, but Ava reminded her that the model was paid and that Amylynn should shut up because – lamb or no lamb – if offered money, Amy would wear it. Of course she was right. If you get paid enough money you can buy a lot of lambs. And if the lambs should happen to get poop on your dress, no one would even notice. Or care. Except 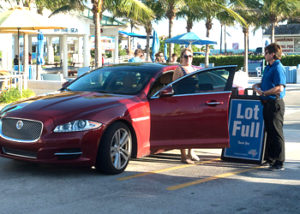 4. How close can we get to the front door? Ava used to be married to a person who refused to valet park. Now she wanders the earth valet parking everywhere. EVERYWHERE. Even when she’s not even going in a restaurant. If a valet comes near her car to park it, she lets them. What’s better than valet parking? Nothing you cry! But you’d be wrong. Because you know what is? Valet parking in the middle of a monsoon! Yup. Ava went out to dinner last night and it started to pour. Out came the valet to the rescue. That kind valet even parked Ava’s car right in front of the restaurant. 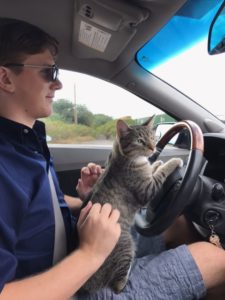 5. Pin the Tail on the Donkey. The Sister’s got an accidental cat. We see you rolling your eyes! Well, it’s true. We had no plans to get another kitty. Well, not a real plan that was going to be executed. It wasn’t like we were lying to ourselves about getting a sixth cat between the two of us. Anyway, the problem isn’t that we now have six cats, the problem is that the new fur baby has no tail. He’s a Manx. That means he has no tail, just a tuft of hair where his tail should be. Amy insists he lost it gambling. Ava can’t pet him right because she always tugs the cat’s tail when she’s done petting it. This cat actually went to college with the oldest Bright child. When the hell did it become okay to bring a cat to college? He is majoring in Catculus. If it had been like that when we were in school – we’d still be there.