It’s a conspiracy to keep me fat

I work in a nine-story building and work on the fifth floor. When I came to work here I thought, “Excellent! I’ll take the stairs and lose some weight!” Good plan, right? Yep. I felt like an Olympian in training. I had all these excellent intentions. Things were gonna work out! 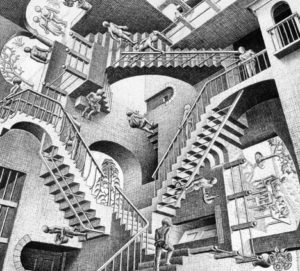 On my way to lunch that first week, I trotted down the stairs. I do that a lot. Go down the stairs because, you know, DOWN. The first time I attempted to climb UP the stairs it ended poorly. I gave myself a pep talk as I walked across the parking lot. This was going to be good. It would only really suck for the first couple of weeks and then my endurance would build and I’d be practically racing up those stairs like Rocky. Yes indeedy!

So, I opened the gray industrial fire door that weighs 7,000 pounds and heaved my chubby little self up the 90 individual stairs to my office. The plan was when I got to my floor I’d sneak into our suite through the back door closest to my office, shut my door, and silently die on the floor so no one would see me.

That is not what happened.

I used the bannister to drag myself up the last few stairs, panted on the landing, and then grasped the door handle. It didn’t budge and it wasn’t because I was now too weak to open the 7,000 pound gray industrial fire door. No, the god damned thing was locked.

Imagine the scene if you will: an empty stairwell, a breathless woman trudging her way back down the stairs, sobbing the whole while. I was a pathetic sight, I’m certain.

So the elevator it is.

Today, I ran out to grab some nice healthy lunch. On my way back I eschewed the stairwell because, you know, fool me once… And I got into the elevator with several other people from my building. We rose to the third floor and several people got out leaving me and one other gentleman alone. The doors closed. Then nothing. Literally nothing. 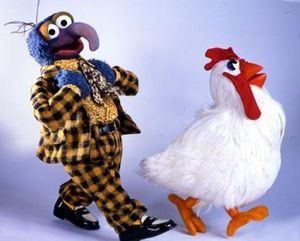 Gonzo and Camila off to climb the stairs

For at least forty-five of the longest seconds EVER that box of death hung there doing nothing. I looked at the man who was surely going to be sharing an obituary with me later and he also appeared concerned. Then all of a sudden our deathtrap jerked to life and shot us up two floors to the fifth like a flying chicken from the Muppets

I’d rather be stuck than catapulted. At least I could have seated myself on the floor, eaten my wrap, drank my flavored water, and read my book until the firemen showed up. I’d have been content for hours so long as the other guy wasn’t a panicky sort. Or at least I would have been until I had to pee. Then things might have escalated.

Speaking of escalators…Can we get one of those?