Thank Zeus September is over. That month was way longer than was necessary. You ever notice how that happens? If you want to see something really horrifying take a look at a calendar and notice how close we are to Christmas. How the hell did that happen? It’s like we weren’t watching and it crept up on us. Prepare your wallet. That’s why we need the Five Favorite Things. When stuff is sneaking up on you and you’re getting mired up in September you need to be on the look out for absurd things to keep you going. Here’s what we found this week.

1. Officer Boris. Amylynn is in charge of finding speakers for our local chapter of Romance Writers of America. Every year we do a panel of dangerous jobs. This year Amy rounded up some Search and Rescue people as well as an officer from our local police department in charge of the canine unit. She absolutely insisted that he bring his canine partner. Holy Moly was this dog cute. We know you have an impression that police dogs are scary, but, in the case of Boris, that was totally not true. It’s possible that we would have a different impression of him if we were criminals and he was actively biting us.

Nevertheless, when Boris is just being a doggy, he’s freaking adorable! He climbed in our laps and showed us his favorite toy. Cutie patootie.

2. Patron Saint of Pajamas. Hugh Hefner died. If anyone ever lived their life to the fullest, we’d guess it was him. The boy who lived at Ava’s house but who is currently in college considers Hugh a genius of style. At the very least he provided the inspiration for the young man’s plan to live the rest of his life in silk pajamas and velvet robes. That’s really all the style points we can give him because that mansion of his was pretty awful. And the grotto? No thank you! We understand he spent an exorbitant amount of money to get the crypt next to Marilyn Monroe. We’re not 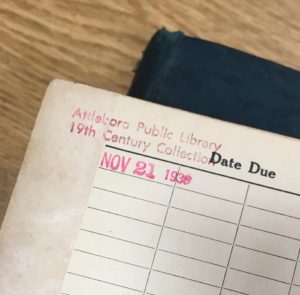 sure how we feel about that exactly. We kinda hope Marilyn haunts him in the afterlife.

3. Hopefully they take checks. We love these stories when they come up. Someone in  Massachusetts was digging around in their friend’s basement and found a library book that was a bit overdue. He returned it to the library who thought it was awesome. The due date stamped on the inside was November 11, 1938. We don’t know anything about the book – “The Young Lady at Home,” by T.S. Arthur. We wonder what the original borrower thought of it? Was it so good he wanted to reread it? Did he lose it? We imagine he misplaced it and found it in

4. Not that Ava would take them up on it. Congratulations to the women of Saudi Arabia! The King has decreed that for the first time in 27 years women will be allowed to drive. Obviously, this is a huge gain for women’s rights and for their individual freedoms. It’s a baby step as they’ll still require their husband or father’s permission to purchase a car, but it’s still a step. We have a few tips for you. Get yourself some oven mitts. We live in the desert too and that steering wheel can get wicked hot. Also, DO NOT allow your children to eat

This Red Velvet was amazing!

in the car – not even once. You’ll never get the goldfish cracker residue from your upholstery. Your Sisters in the US are happy for you. Here’s to midnight ice cream runs, ladies!

5. Just Desserts. As you may have read in this blog, the Sisters work in the mortgage industry. Every year, the Women’s Council of Realtors has a charity auction. It’s brilliant because it only includes cake – homemade, bakery, restaurant – cake from everywhere! This year there were over 100 cakes auctioned off and the charity made a boatload of money. Some of the cakes went for $600.00 and higher. A lot of the winners share their prize right there at the auction, plates are provided on all of the tables. The Sisters ate so much cake they can’t even look at it right now. We won’t need more dessert until at least Thursday.

One Response to September 29