Well, didn’t this week seriously, seriously suck. We were completely stunned by Vegas – kinda numb which is a truly awful thing to admit, but lately it just seems like there have been so many of these tragedies. And then Tom Petty died and, well, shit. Everyone go fetch a puppy or a kitten and come with us. We’re going to hole up in a big comfortable bed, watch reruns of anything we can find on television, and eat terribly unhealthy food. After all the abuse the universe has heaped on us for the last month or so, we all deserve to feel sorry for ourselves for a bit. 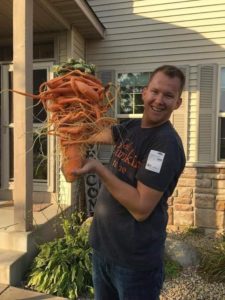 Come on. We just changed the sheets. Otherwise, here’s some things to get you through. You’ll understand how we only came up with 4.

1. He’s probably got excellent vision. You’re never going to believe any part of this story. The whole this is so very, very odd. Come along with us on a magical ride. There are people in this world who are able to grow things – you know, plants and vegetables. The only thing the Sisters can grow are pets and children. But there is a dude, nay a wizard, in Minnesota who calls himself Chris Qualley.  Chris grows carrots. Extraordinary carrots. This latest one is in the Guinness Book of World Records as coming in at 22.4 pounds. Amylynn would like it noted that the carrot is in fact bigger than her cat, but just barely. If you want to learn more you can go to the Carrot Museum on line and be educated. Seriously. There’s a carrot museum. The Sisters couldn’t care less about the hows and whys of this horticulture 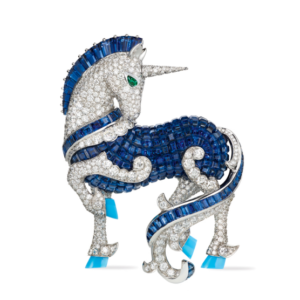 snoozefest. Hey Chris – as soon as you turn it into a carrot cake you be sure to let us know. We care about carrot cake a whole lot.

2. Let us know when you make a Kraken. We’ve mentioned before how much we love jewelry. Heck – we’ve even admitted that if there’s a zombie apocalypse the first place we’re going is Tiffany’s flagship in NYC. There’s no reason you can’t wear diamonds while macheteing the walking dead. We also love glossy magazines because, among other fabulous things, they’re often filled with spectacular jewelry ads. Ads where the jewelry is so freaking expensive that they won’t even list the value – “price available upon request” they say. That’s hoity-toity for “you can’t afford it”. Ava found this in the latest issue of Elle Décor. This beauteous item is by Van Cleef and Arpels. There is a whole glittery collection inspired by Noah’s Ark. We’re not sure about that title since, as far as we’re aware, no unicorns, Pegasus, or phoenixes made it on the Ark. Maybe they should make a Loch Ness 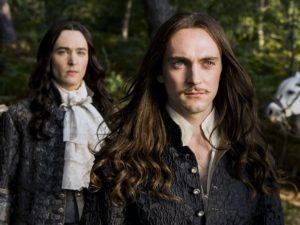 Monster or a Big Foot and call it the Mythical Ark. We should get a discount for all of these good ideas. Call us.

3. Oh the hair… We discussed this one before in the Five Favorite Things, but it’s back and worth another mention. If you’re not watching the Ovation series Versailles you’re doing yourself a serious disservice. This show is unbelievable. It’s all about Louis XIV, the Sun King, who built the palace Versailles. Well of course HE didn’t build it but we’re not in the mood to argue semantics. The show is actually filmed at the palace so all the gorgeous sets are real. The costumes make a person want to weep they’re so lovely and expensive. The acting is phenomenal and the story incredibly gripping all the more so because this shit actually happened. Several times in season one we had to look stuff up because it seemed too fantastic to be true. Season two just started. Go watch 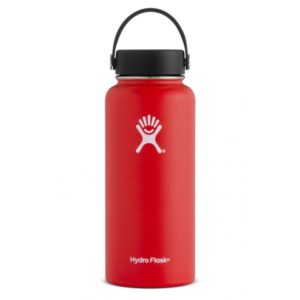 season one – there aren’t that many episodes so you can get caught up quickly. You’ll be thankful you did. Also, we want you to know the actors playing the royal brothers are scrumptious.

4. Free advertising. The Bright children demanded new water bottles. We live in the desert and water bottles are a very serious matter. V.e.r.y. s.e.r.i.o.u.s. It’s practically a state law here – you can’t leave your house without water. Ava always forgets. Ava is lucky to leave the house everyday with the essentials ie; herself and her purse. Anyway, the new water bottles are called Hydro Flasks. They keep ice and water cold for up to 72 hours. And by goodness, they really do. You don’t truly know joy until you take a sip of icy cold water on a 110 degree day. You know how you buy stuff all the time and the product never quite lives up to the advertising? Not so with the Hydro Flask.  It really works. The problem (Isn’t there always a problem?), is the price. These things cost $900.00 dollars each.  Okay, that’s an exaggeration. They cost around $40.00 and on up each depending on the kind, size, personalization, etc. No one should pay $40.00 for a water bottle unless you live in the desert and than it’s okay. At least according to the Bright children.

One Response to October 6