Today is Friday the 13th. This does not disturb us. We are not superstitious. Black cats? Yes, please. We’re not walking under any ladders because we don’t have anything to do with ladders, no matter what day it is. We’re even happy to have 13 people to dinner, so long as there’s dessert. We just don’t believe in bad luck. Although, maybe we should reconsider this. Wouldn’t it be awesome if you could just wave some sage around, chant a few words, and good stuff would happen? If that worked, the first thing we’d do is chant for some lottery winnings. Every day spent in our day-jobs makes us pine more desperately for our

book store. These five things made it better for us this week. Hopefully they work for you, too.

1. Go, go Godzilla. We’re huge fans of John OIiver’s Last Week Tonight. Sunday he was discussing the latest social issue in America regarding the removal of Confederate statues. He suggested that maybe we should get some statues of Godzilla to replace them. We were immediately intrigued. We think that would be awesome. There are simply not enough statues of nuclear-born monsters in this world. Wouldn’t that be fabulous? We love Godzilla and we think someone should start a Go Fund Me

account. We’d totally contribute. We should put on the South Lawn of the White House. Have it look directly in the windows.

2. Russell Brand. Turns out Russell is hot. We know what you’re thinking. He’s not hot; he’s annoying. That’s what we always assumed, anyway. Amylynn was completely ready to be royally irritated. It doesn’t take much to irk her anyway. Ava knows this and purposely engages people that she knows will rankle Amylynn. She’s a sadist. Anyway, Russell was on Bill Maher last week and he was a revelation. Besides the fact that he’s got crazy/beautiful hair that would qualify him to appear on Versailles, he’s smart. Really smart. He goes a million miles an hour which would be totally exhausting to hang around with, but he’s also shockingly intelligent. Bill offhandedly asked him to 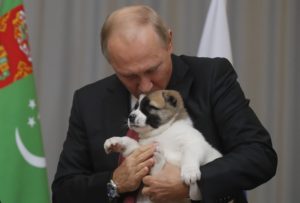 define gerrymandering and much to everyone’s surprise, Russell gave a text-book definition right off the cuff. That qualifies him as Sister Crush-Worthy. We totally get it Katy Perry.

3. We need a puppy! Somehow we’re living our lives wrong. We tell everyone we meet that we want a puppy. That has done us absolutely no good whatsoever. Vladimir Putin on the other hand is gifted a damn puppy every time he turns around. Just this week he got his third gift of a puppy. This time a Central Asian shepherd from Turkmenistan. He’s already received two other puppies – a Bulgarian Shepherd from, you guessed it, Bulgaria and an Akita from Japan. All of this because he’s mentioned that he likes dogs. We’re not

kidding when we tell you everyone we know is aware that we need a puppy and we get NOTHING. And the real kick in the ass here? He gave them stupid names. Verny, Buffy and Yume. He’s a moron. So unfair.

4. None of them are ever fat. The North American Wife Carrying Championships were held recently in Maine and the winners this year are Jake and Kirsten Barney from Virginia. In case you’re unaware, this is a race wherein the husband totes the wife through an obstacle course. If you think that sounds absurd, then you should be made aware that the Barney’s won fives-times Kirsten’s weight – $630 – and 12 cases of beer. 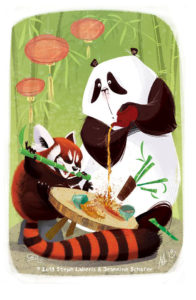 We’re nearly desperate for this one.

So there’s that. We remember a time when we were 126 pounds. We did not allow ourselves to be carried for beer. Now if there’d been a puppy in the offing…

5. Steph Laberis, again. Remember a while ago when Amylynn bragged about the charming kitty print she’d bought from this artist the Sisters loved? We’d been searching and searching for where to buy more of her work and we hadn’t been successful. And then there was a horrible fire that ravaged California and Steph Laberis posted on Facebook how she was selling signed prints and all of the money was going to a relief fund. With a squeal that could probably be heard all the way to California, Amylynn popped over to her site and there were several of the prints we’ve been dying for. We bought  them all. ALL. We’re good humans for contributing to the cause and we got the prints we wanted. Honestly, it’s like Christmas. We even got some prints for people for Christmas. Maybe we’re living right after all. It’d be better with a puppy.