Hell on a one lane road

As part of the state centennial celebration, our local paper, The Picayune, has been reprinting news stories from 100 years ago.  Today’s article relates 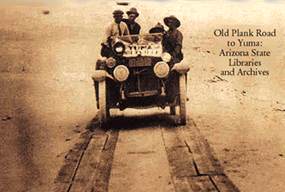 That the crossing of the desert between Phoenix and Los Angeles will soon become an almost daily occurrence is the prediction of Dr. H.A. Hughes, who today stated that he was seriously thinking of organizing a party of five or six cars over at the same time.

Dr. Hughes feels that the trip could be made in three days with the greatest east and not prove tiresome. In fact, he thinks it could be made in much less time but feels that by dividing the trip into three daily stretches, greater comfort would result to the occupants of the cars.

Several weeks ago, a little ford Model T, manned by Morgan Lloyd and Mark Dunbar, left Phoenix for Los Angeles and make the trip with east, the only delay being caused by tire trouble.

Lloyd and Dunbar were in no hurry and took six days for the trip, but the latter, who has returned to Phoenix, stated that it could easily be made in half that time.

The most pleasant way to make the trip would be to leave Phoenix early in the morning and drive to Yuma the first day, a leg of the journey that encounters practically no bad roads.  An early start from Yuma would land the autoist in Campo by night, where excellent hotel accommodations can be procured, while the drive from Campo to San Diego and thence to Los Angeles over the coast road, which in reality is a boulevard almost equal to paved streets, could be made with east the following day.

This whole story made me laugh heartily.  I would certainly kill myself before we got to Yuma if I was in that car.  Or, more likely, the other passengers would kill me.  I’m not a good road trip person.  I hate sitting still for that long. I just want to get where we’re going already. I don’t like to make stops for bathrooms or, really, even eating.  I’m inclined to just stay in the car and push on.

I will admit that three days is a lot more palpable than the approximate ten days it would take on horseback.  I’m not sure how the gentlemen in the above story got across the Algodones Dunes since the plank road wasn’t built until 1915. Yes, the plank road.  The speed limit on the plank road was 10mph. This makes me cry just thinking of it.

pullouts for passing. During sandstorms, the road could become impassable, forcing motorists to wait. But sandstorm or not, it was always a rocky ride, earning the road the nickname “Old Shaky.”

In 1925, traffic increased to 30 cars per day — a problem; officials reacted by regulating the traffic: east-bound traffic would leave on even hours, westbound traffic on odd hours. But this wasn’t enough: after 10 years of use, the road was falling apart and traffic jams were frequent and sometimes nasty when the right-of-way was disputed.

Can you imagine the misery scooting along the plank road at a mind boggling 10 miles per hour? It’s 110 degrees outside without a wisp of shade, and automobile air conditioning is still decades away. But I am still highly amused by the idea of a traffic jam on the road with all of 30 cars on it a day.  Regulating the departure times by odd and even hours is hysterical.  Maybe that’s what California should consider with the panic over the weekend closure of the 405 Freeway.

When Kelli takes her family to San Diego next week, she can be very thankful.

As soon as there is teleportation I will be gleefully happy.