We loaded up the covered wagon and went to the Costco so we could spend two hundred dollars on enormous quantities of stuff.  We wandered passed the frozen food aisles where all the best samples are.  We roamed through the bakery and inhaled the cookies and lemon cakes. Where the muffins ended the produce began. I sniffed the nectarines and squeezed the avacados and then I saw the stupidest, politically correct nonsense yet.

Do you recall several years ago when some moron at some New York ad agency decided the prunes should be renamed “dried plums” because “prunes” sounded old and un-yummy.

Yeah.  That’s just stupid.  These were probably the same people who suggested North Dakota should change it’s name because “North” Dakota just sounded too cold. What did they think was a better option? North Florida? Asinine.

And just when I thought Madison Avenue couldn’t be more idiotic, I saw this in the produce department. 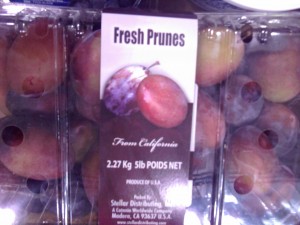 So now we have “Fresh Prunes”?