Amylynn finds some of the most bizarre news stories ever.  She evilly shares them with me knowing that I will dwell on them – this usually backfires on her because my dwelling on them involves me driving her nuts about the details of the 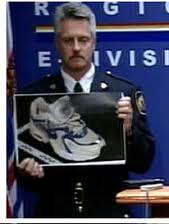 BC police showing one of the running shoes

Today, she found the above entitled news story.  It is legitimate and not from the Onion.

According to the article, roughly a dozen such human feet have washed ashore since 2007.  “. . . police said it appeared the feet separated from the bodies naturally in the water and foul play wasn’t suspected.”

How is foul play NOT suspected?  How could a foot naturally separate from a body?  Are people just swimming in the water and a foot falls offs?

“Just leave it, it will wash up later,”  Amylynn says.

What the hell is going on up in British Columbia?  Part of me wants to make Amylynn and Kelli jump in the car and go have a look.  Another part of me is never going to British Columbia again.

I spent the entire afternoon aggravating Amylynn with “How is that even possible? How?”

But really, how could a foot fall off of a human and no one reports it missing and yet no foul play is suspected??  How is that even possible?  How?

Amylynn, you better find out what the deal is up there in Canada or I’m going to still be driving you nuts about this tomorrow!

When you followed the jump to read the actual news story I’d like you to see the very last line. Where “a forensic pathologist and an anthropologist” determined that a hoax foot was actually an animal. ??? Have any of you ever looked at an animal foot? They look absolutely NOTHING like a human foot what with the no toes and lack of arch, etc. What the hell is going on over in B.C. that they needed to consult a forensic pathologist and an anthropologist on this? Was it the cloven hoof that finally gave it away?

Also, at what point do the police become jaded by this?

“Oh, look, Bob,” Gary the policeman says to his partner, “another foot.”

“Eh,” Bob the policeman says, “let’s check it out after lunch.”

“No worries,” the hobbling jogger tells them. “It just naturally seperated.”

Additionally, I’d like to comment that this article has confirmed one thing for me and that is running is obviously NOT healthy. As you will note, all of the non-foul play feet that washed up were encased in running shoes. This reminds me that Jim Fixx died of a heart attack while jogging. Clearly, this is a highly dangerous activity – especially if it makes your feet so flimsy they just happen to natuarally seperate from your body the minute they touch water.

Don’t look to the Sisters if you chose to ignore our sage advice and sooner rather than later you have damp stubs at the end of your shins.