So MY AGENT has book number two. The working title is Miss Goldsleigh’s Secret. Along that same vein, and in trying to sell them as a series which they most definitely are, the first book’s title was changed to Lady Francesca’s Secret. MY AGENT told me to start writing book three so last night I wrote the first several paragraphs of what will be titled The Duke of Morewether’s Secret.

Do you see the theme? If you know anyone at Avon or any of the other “Big 6” you should tell them that this blog is hysterically funny and certainly my books will be equally so, and they would be exercising incredible foresight in offering a three book deal now before the bidding war starts.

Last week the Sisters three met over sandwiches and cheese cake and we built my W plot for this third book. The W is a fiction writing technique to get the goal, motivation, and conflict all lined up so that you don’t end up with an 85,000 word book with absolutely no conflict. I know someone who did that on their first draft of their first book (ahem) and that’s why it took her two years and three drafts to get it finished. 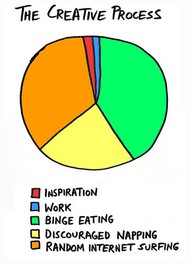 I absolutely love it when the three of us get together and do this sort of thing with one of our projects. Since the three of us share the same brain, it’s great when we all get together and it can function as one unit. I really wish one of these days we’d videotape these sessions because so much gets lost as we talk over each other and the ideas are tumbling out so fast no one can write them down fast enough.

If there’s one thing the Sisters can do, it’s come up with an outstanding story. Too bad we don’t have all the time in the world to sit in coffee shops and write to our hearts content.

Now, it’s up to me to write the Duke’s secret. You wanna know how I do it? I think this person (I don’t know who it is or I’d happily give them all the credit because it’s genius) has totally nailed it with this graph.