Ava has been left in charge of the BLOG – prepare yourselves! 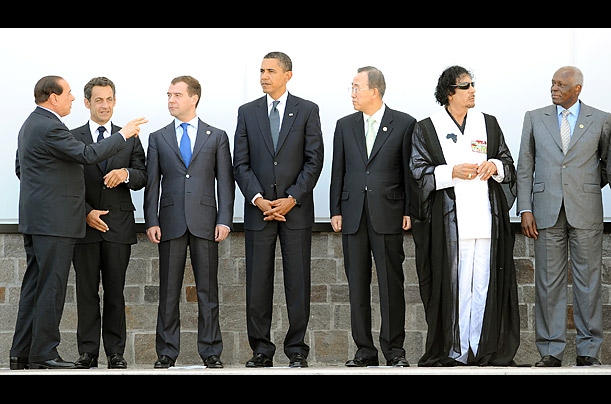 Before anyone gets excited, let me explain the above photo.  After the demise of the evil Muammar Gaddafi, Amylynn and I went on the Internet to look up photos of his clothes for which we have already admitted a weakness.  Admittedly, this happened in the airport on our way home from New Mexico (Hi Uncle Ken!) and we were a tad bored.  Anyway, we came across this photo.

At first, we thought it had to have been photo shopped.  Just look at it closely – Muammar appears to have been added since he is standing in front of the other two men on either side of him.  Also, look at what everyone else is wearing – suits.  Suits and ties.  Dark businesslike suits, ties and shiny shoes.  I know what you’re saying – “Muammar is wearing a suit as well.  It may be WHITE and he may have accessorized with a robe but surely Ava, you see it’s a suit.”    Now, look at everyone else again – they are all looking to the left, but not Muammar, noooooo, he’s looking to the right.

He’s wondering when the bus is coming.  He’s wondering how he got involved in this event to begin with.  He’s thinking he’s glad he wore his sunglasses because maybe he’ll go unnoticed and can slip away soon.  Where is that bus!

He’s definitely thinking he’s never attending the G8 Summit again with such poor dressers.  You know this is exactly what he’s thinking.

Every-time Amylynn and I want to laugh, we pull up this photo.  We’ve looked at it so many times that we’re surprised the FBI hasn’t shown up to interview us about it.

Feel free to send us your silly photos – we especially like anything that may cause the authorities to become interested in you.