In the middle ages in Europe, the kissing bough was the top of an evergreen tree hung upside-down (a symbol of the Holy Trinity) in the doorway of the home to represent heavenly blessings for the members of the household. In addition, visitors would exchange embraces with the master and mistress of the household upon arrival to demonstrate friendship and goodwill.

In Georgian times, the kissing bough is a round ball of mistletoe (wound around a circular wire), evergreens, apples, oranges, paper flowers, ribbons, colored paper and dolls representing the Mary, Joseph and the Christchild. In many places, households would vie with each to produce the most elaborate kissing bough.

The custom of stealing kisses beneath the kissing bough, or even a sprig of mistletoe hanging from the ceiling or doorway in a place where people were certain to walk beneath it, became popular in the late eighteenth century.

In A Twelfth Night Tale, the Barlows and their guests decorate neighboring Livingston House—which had been sadly neglected since Mrs. Livingston’s death several years ago—on Christmas Day, mostly because Mrs. Barlow is anxious to find a suitable way to divert the rambunctious children away from her home furnishings. While the children eagerly make paper flowers and chains at the neighbors’ home, Lucy and Andrew spend some quality time together as they set out in search of greenery for their part of the project.

Celebrate the Holidays With a Kissing Bough 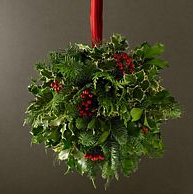 History becomes real to children when they become a part of it themselves; thus the reason for Thanksgiving and Christmas pageants and plays. Creating a kissing bough for your home is a Christmas tradition the entire family will enjoy. You can use wire or oasis balls and decorate with ribbons, paper flowers, mistletoe and greenery, holly berries, and whatever you choose.

Celebrate the Release Day of A Twelfth Night Tale! 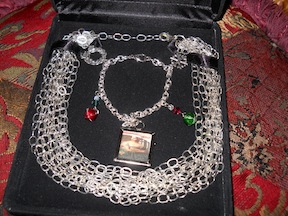 Susana is giving away a fabulous sterling silver necklace and A Twelfth Night Tale Christmas charm bracelet (silver-plated). Click here for the Rafflecopter! 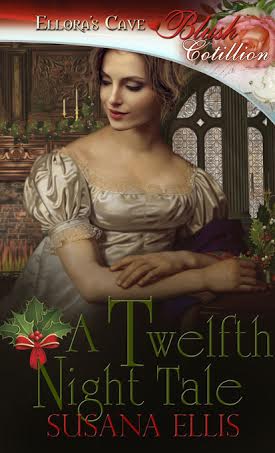 About A Twelfth Night Tale

A wounded soldier and the girl next door find peace and love amidst a backdrop of rural Christmas traditions.

Without dowries and the opportunity to meet eligible gentlemen, the five Barlow sisters stand little chance of making advantageous marriages. But when the eldest attracts the attention of a wealthy viscount, suddenly it seems as though Fate is smiling upon them.

Lucy knows that she owes it to her younger sisters to encourage Lord Bexley’s attentions, since marriage to a peer will secure their futures as well as hers. The man of her dreams has always looked like Andrew Livingston, her best friend’s brother. But he’s always treated her like a child, and, in any case, is betrothed to another. Perhaps the time has come to put away childhood dreams and accept reality…and Lord Bexley.

Andrew has returned from the Peninsula with more emotional scars to deal with than just the lame arm. Surprisingly, it’s his sister’s friend “Little Lucy” who shows him the way out of his melancholy. He can’t help noticing that Lucy’s grown up into a lovely young woman, but with an eligible viscount courting her, he’ll need a little Christmas magic to win her for himself.

Chapter One
The Barlow Home
near Charlbury, Oxfordshire
23 December 1813

“It’s so kind of you to call, Lord Bexley. The flowers you sent are simply lovely, are they not, Lucy?”

Unable to miss the warning tone in her mother’s voice, Lucy sat up straight in her chair and smiled sweetly at their caller.

“Oh yes indeed. They are undoubtedly the most beautiful I’ve ever received, my lord.”

Of course, she did not mention that they were the first flowers she’d ever been sent by a gentleman. And considering that there were few opportunities to meet eligible gentlemen in the quiet little neck of the woods where the Barlows resided, the arrangement was quite likely to remain the only floral tribute to come her way.

Her caller beamed with pleasure. “They were the best I could find at the florist, but of course they cannot hold a candle to your beauty and sweetness, Miss Barlow.”

Lucy swallowed and forced herself to reply. “You embarrass me with your flattery, my lord.”

“Not at all,” he insisted. “You were quite the belle of the Christmas Ball last evening, Miss Barlow. I was much envied to be allowed the honor of two dances with you when so many gentlemen had to be turned away.”

The “Christmas Ball” was merely a small celebration at the local assembly rooms. Her mother had encouraged her to favor Lord Bexley, but in truth, Lucy herself had not found him objectionable. He was an accomplished dancer and quite distinguished-looking, in spite of the fact that he had at least twenty years over her.

At eighteen, she was of an age to be out in society, and Lord Bexley, a wealthy widower from Warwickshire, was undoubtedly the most eligible gentleman in the county. Recently out of mourning, he was seeking a new wife and a mother to his three children, and as Mrs. Barlow kept telling her, Lucy should be flattered that he seemed to be favoring her for the role.

Well, she was flattered. Wasn’t she? The number of young ladies far exceeded that of eligible gentlemen, and she didn’t wish to be left on the shelf. With her family in financial difficulties and four younger sisters to be married off, Lucy knew she owed it to them to marry well and do what she could to find her sisters suitable matches as well.

She was prepared to do her duty and make the best of it, but somehow, when she thought of marriage and children, it was not the kindly Lord Bexley who came to mind. It was the face of the strapping, dark-haired Adonis with laughing gray eyes who lived on an adjoining estate with his younger sister—her bosom friend Jane—who had teased her unmercifully from the time she learned to walk. She couldn’t remember a time when she hadn’t been in love with Andrew Livingston—she’d even asked him to marry her at the age of five when he’d been twelve and about to leave for Eton. He’d laughed and quipped that it would be like marrying his sister, and she’d nursed a broken heart ever since.

She sighed as she frequently did when she thought of Andrew and his affianced wife, and her mother glared at her. Fortunately, Phillips wheeled in the tea cart and Mrs. Barlow’s attention was mercifully diverted.

“Please do the honors, Lucy. An excellent opportunity to practice your housewifely skills.”

Lucy flushed. Could her mother’s intentions be more obvious? But Lord Bexley did not seem to notice. He smiled kindly at her somewhat shaky inquiry as to his preferences, and thanked her graciously when she brought him his tea and a plate of cherry tarts.
“Quite charming,” he commented as he regarded her with obvious approval. It was unclear whether he was speaking to her or to her mother, and Lucy wasn’t sure how to respond.

Fortunately, there was a shriek followed by the sound of fierce arguing from the back rooms of the house. Lucy turned instinctively to the door, which was promptly thrust open and filled by the figure of her sister Lydia, who was breathing hard and wringing her hands in agitation.

“Do come, Lucy! Lila and Louisa are having one of their rows again, in the kitchen of all places. Lila broke one of Cook’s mixing bowls, and Cook swears she’ll leave if someone doesn’t stop them and you know you’re the only one who can, Lucy!” She flushed when she saw Lord Bexley and her mother’s angry face. “Oh…pardon me, I didn’t realize we had a guest.” She backed out into the hall, shooting Lucy a pleading look as she did so.

Relieved for an excuse to terminate the social call, Lucy muttered her excuses and scrambled out of the room. But not before she heard her mother’s mortified apology and Lord Bexley’s soothing reply that he found it quite agreeable to discover a young lady so accomplished in the maternal skills.

Goodness, he really was intent on courting her! She should be flattered. She was a sensible girl, and it was pointless to set her cap at Andrew Livingston, in any case. Lord Bexley would be an excellent match for her. His three daughters could not possibly be as troublesome as her two youngest sisters, after all.

She gritted her teeth and hurried to the kitchen, the ineffectual Lydia as usual trailing behind her. The second eldest Barlow daughter was as helpless as their mother at controlling the two youngest children. When Lucy married and left the house, as she would in time, her bookish middle sister Laura was going to have to take up the reins.

A former teacher, Susana is finally living her dream of being a full-time writer. She loves all genres of romance, but historical—Regency in particular—is her favorite. There’s just something about dashing heroes and spunky heroines waltzing in ballrooms and driving through Hyde Park that appeals to her imagination.

In real life, Susana is a lifelong resident of northwest Ohio, although she has lived in Ecuador and studied in Spain, France and Mexico. More recently, she was able to travel around the UK and visit many of the places she’s read about for years, and it was awesome! She is a member of the Maumee Valley and Beau Monde chapters of Romance Writers of America.