It’s been a tough week. Ava was out of town visiting all of the colleges in the northeast that the boy who lives at her house ever thought he’d consider, no matter how remotely he even wanted to go there, or if they even have his potential major or not. Some of the colleges Ava dismissed out of hand based on their mascot. Did you know the Princeton Tigers don’t even have a real tiger? We don’t have time for that kind of tomfoolery. Meanwhile, Amylynn held down the fort at work, all the while hoping Ava would get the Sisters enrolled in any college so they wouldn’t have to do mortgages anymore.  While you’re waiting for us to leave you for college – pull up a school desk and study the following: 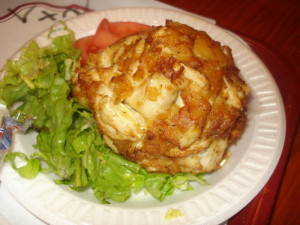 1. Maryland Crab Cake. No, that’s not a new kind of cake. We mean real crab cakes.  With crab. No cake. Ava discovered the best crab cakes in the world at an amazing crab cake stand in Baltimore called Faidley’s. Ava is usually suspicious of crab cakes unless she made them.  People will put all sorts of things in crab cakes that don’t belong in there but these crab cakes were

perfect! They contained crab and spices, no peppers, onions, bread crumbs. Nothing but sweet crab.

2. The Museum of Visionary Art. WOW. All of the art in this museum is non-standard. You won’t find any of it in your average run-of-the-mill Metropolitan Museum of Art. There is art made solely from the threads of socks embroideried into tiny 2 inch by 2 inch incredible works of art by a man who was in prison for years. There are two floor length crocheted capes in orange and black granny squares by an autistic woman who was a knitting savant. The entire Bright 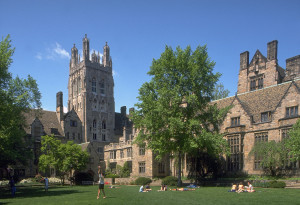 family sat in the pie hole of god for a performance of light raining down from the roof of its mouth. Go see this museum for yourself, you won’t be sorry.

3. Yale Campus. Ava wasn’t sold on Yale for the boy who lives at her house. She thought it might be over hyped because, well, it’s Yale. She was wrong.  The campus of Yale is like no college she’d ever been to. The entire school is magical.  The library was actually designed to be a cathedral. Aside from the outstanding learning opportunity it represents, the

students live in castles. We swear that’s true. They get a Yale education and they live in castles!  Sign Ava and Amy up – forget the boy – they’re in!

4. NYC Elevators. Those of you who know us know Ava is not a fan of elevators. However, she did find something worse – the stairs at the Cooper Union college. The building has 9 stories. Along the corners are stairwells made of metal mesh. Apparently, Cooper Union architects thought that would be cool. So, you’re on the eigtht floor and you and your fear of heights look down and almost pass out because you feel like

you’re falling eight stories. Ava’s not sure which is worse, falling to her death or dying in an elevator accident.

5. Rules to live by. Forget that “Everything you needed to know you learned in kindergarten” BS. The combined Bright families are going to save a fortune on college because the NYC subway has their education covered for $2.75. They have a campaign called Courtesy Counts. But it doesn’t just count in the subway, it covers all of life.  Take for instance “Keep your stuff to yourself”. If everyone would just learn this one simple rule think how easy life would be for the rest of us. We don’t need to know all of your drama. We really don’t.  And Ava’s personal favorite – “Poles are for safety, not your latest routine”. Hold the pole, not our attention. A subway car is no place for show time. Right?! How many times have you wanted to tell someone else to get off the pole? That’s something you can’t learn in college.

(Spoiler Alert: Columbia’s mascot is a lion. Yep, you guessed it. They don’t have a lion there so don’t bother to ask.)