Part 2 of 3 in the Animals Goings On: Where the Hell is that Dog?

So, a day or two before Geddy died, Winnie the Wonder Mutt disappeared.

Frankly, this wasn’t shocking. That dog is 1/2 kangaroo. We’ve not been able to keep her in the yard. She can clear that five-foot block wall like it was a curb in a parking lot.

Up until this point, Winifred just visited the neighbors. She had a buddy around the corner–another black lab who enjoyed a good romp. She’s been fixed, so there’s no worry on that account. 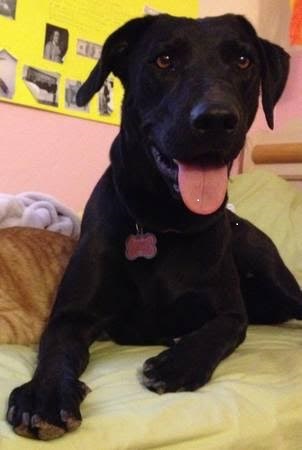 This particular day had called for rain. Not a big deal, we thought. No where in the weather forecast had there been any mention of a typhoon. The rain was torrential, a deluge, plus there was more thunder than usual. Both My Honey and I work on the other side of town from our house. When my family got home right after school, they called, slightly hysterical, that they couldn’t find Winnie. They’d already been canvassing the neighborhood and calling animal control.

We can only suspect that she ended up on the wrong side of a wash or something.

Over the next couple of days we walked and cruised the neighborhoods, we visited all the pounds, we posted on Facebook, Twitter and Craig’s List. Our friends and family were all keeping an eye out. We posted one hundred and fifty Lost Dog posters. We always checked the DOA lists and were thrilled to find that she was never on any of them. At least there was that.

Over the course of the next three weeks, we searched constantly. We got several calls from people who’d found black labs and I visited at least three of them with the possibility that they were Winnie. No luck. As the weeks spread on we began to despair.

Nothing is more depressing that touring the pounds at Animal control and the Humane Society day after day looking for your long-lost doggie and having to leave all those poor animals there alone.

Then Geddy died and now Winnie was lost–our remaining animals Jojo Kitty and Roscoe were seriously depressed, nay despondent. They kept eyeing us suspiciously like, “Which one of us is next?”

It was awful and we were all very sad.

Then one morning, around 5 freaking 30, there was howling. I kept kicking Roscoe the hound dog at the foot of the bed to shut up. My Honey, who was already up for work, stuck his head out of the bathroom and wondered aloud what the hell that was. I didn’t know and I didn’t care; I just wanted it to stop. Once I get to bed, I’m very serious about sleep.

When he opened the back door to let Roscoe out to pee Winnie ran in! She’d hopped right back over the wall and was under our bedroom window howling to be let in.

There was celebratory barking and much frolicking through the house. Jojo Kitty crawled all over her in his excitement. He seriously missed his best friend. She looked great for being gone for 3 weeks and 1 day. There were some cuts and scrapes but nothing we wouldn’t have expected from three weeks of shenanigans. We did think it was unusual that she wasn’t skinny and her coat was shiny. She looked remarkable all things considered.

Now comes the weird part. When My Honey left for work a few minutes later, there were hamburger balls on our front porch. Like the size of softballs, hard, round balls of cooked meat. Very odd, right?

The best we can think, someone had our Winnie for quite a while. They fed her and took care of her because she’s very sweet and pretty, but then she drove them as crazy as she drives us and they brought her home. Our phone number and address is on her tag. Someone dropped her off at our house at 5 in the damn morning and left her meatballs to make her stay.

What the hell is that all about? Why would someone do that?

What ever the reason, we’re so, so happy to have the world’s prettiest hybrid kangaroo home where she belongs.

Do you have any other theories on what the hell happened?

2 Responses to Part 2 of 3 in the Animals Goings On: Where the Hell is that Dog?