Here we are again. The end of another week. What have we accomplished? Not a whole hell of a lot. How about you? This isn’t how you thought it was all going to turn out, is it? Us either. No one ever said anything about this constant working and bill paying and fighting with your kids. Gah! We should have paid more attention to our parents when they were going through this. In case any of your cares, we think it’s bullshit. We would start a revolution but that seems like a lot of work. 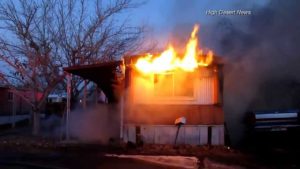 And that, right there, should explain the problem. Never mind. Carry on.

1. This could happen. Amylynn was cackling away while reading the newspaper the other day. It seems that a dude set his manufactured home on fire because he was trying to burn spiders and spider webs with a blow torch. Amylynn couldn’t believe what an idiot this fellow was. Her Honey looked at her strangely. “You’d do that,” he said, “probably without even thinking about it.” It’s probably true. Amylynn’s aversion to spiders is well documented on this site. But still, a blow torch? Maybe he meant to burn the place down, she 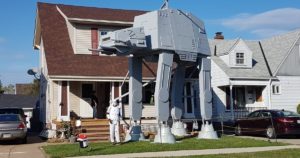 suggested. But it turns out his mom was inside. She lived, so don’t panic, but we’d like to think he wasn’t sending her to hell with the spiders. Amylynn would like it noted that she doesn’t even own a blow torch.

2. Doing it right. Halloween is just around the corner. You wouldn’t know that at our house. It’s supposed to be in the high-nineties next week. The only way we know it’s almost Halloween is that the Christmas decorations are starting to go up at the mall. Blahahahaha. We exaggerate. The only way we know it’s Halloween is because there’s pumpkin-spice crap at the Starbucks. The people in Parma, Ohio are way luckier in that they have a dude who made a two-story At-At in his front yard as a decoration. It’s amazing. The crazy thing is that he’s not even a Star Wars fanatic. 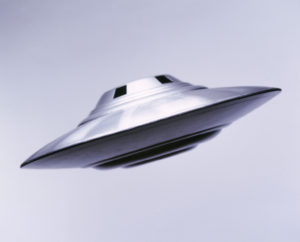 He just thought it would be cool. And it is. We’d totally wear our General Organa costumes over there and hang out.

3. We have enough crazies, thank you. The best stories come out of Florida. Take this one for example. There’s a woman running for Congress who stands by her story that she was abducted by aliens when she was seven, “but that should detract from what she’s done here on Earth since then.”  The whole thing has an Alice in Wonderland aspect to it, doesn’t it? So what has she done on Earth, you ask? She’s a leadership teacher at Miami Dade College and runs a consulting firm. We don’t know what they consult on, but it certainly sparks our curiosity. Tin foil hats perhaps? Sure, she may be nuts, and her primary claim to fame is that she’s ridden in an alien space ship, but she’s held a job so elect her to Congress. Everyone calm down; it’s just alternate facts. Gadzooks, we’re spiraling, people. 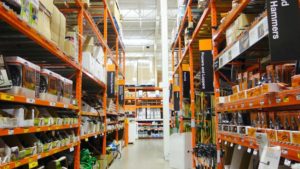 4. The color orange. Some folks don’t think the Home Depot is the place to get parts to your Halloween costume.  Those people would be the employees. Ava took the boy who used to live at her house but now lives on a college campus there to help find wire for her Halloween costume. Turns out they had just what she needed but it needed to be cut with bolt cutters. If you’ve ever been in a HD, you know they have tools around the store you can use. Or, if they don’t want you to use them, they shouldn’t leave them out. Ava talked the boy into helping her cut the wire. After he was holding the bolt cutters she said “If any employees see us, drop the cutters and wire and make a run for it.” That kid has no sense of humor because he put the tool down and went and got an employee to ask permission to use them. After much explaining and divulging the fact the boy was an engineering major, permission was granted. Ava sternly told the employee the HD logo color was ORANGE just like Halloween for goodness sake and they should be more accommodating to Halloween costume builders, shouldn’t they? Ava informed the boy the whole event would have 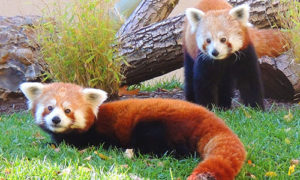 been more fun with Amy.  Together, they would have never asked for permission and nothing would be funnier than two chubby women making a run for it from a Home Depot with wire and a bolt cutter on the evening news.

5. We’re starting a Go Fund Me for bail. The news just came out. One of our life long dreams is about to come true. Our prayers to all the gods have finally been answered. They’re opening a Red Panda exhibit at our local zoo. There’s going to be two of them – the perfect number. They’re not staying permanently (booo!). They’re just here as a layover until their Utah habitat is completed. But we’ll get them for a while so we’ll have to act fast. A couple of facts you may not know but are integral to our happiness. Red Pandas only weigh 7 – 13 pounds. Jojo Kitty is twice that. Hell, Quentin is already over that and he’s just barely a year old. Also, their diet consists mainly of bamboo. You’ll find recipes for bamboo cake in our search history. We predict that Coach will be having a sale on their tote bags for Christmas.

One Response to October 20