Amylynn has the day off for Veteran’s Day. Ava does not. This provides Ava no amount of hurt feelings and Amy immeasurable glee. Not that Amy is rubbing it in. She is not. Sorta. However, instead of being at work, Amy is still in her pajamas with a cat on her legs while Ava is dealing with crazy people. On the other hand, Amy’s entire family is home for the holiday and that means that The Bandit is also sharing the living room, still clad only in underwear, giving a loud play by play of whatever inane video game he’s playing. So everything isn’t peaceful and light. Still, better than being at work any day. If you’re toiling away then enjoy 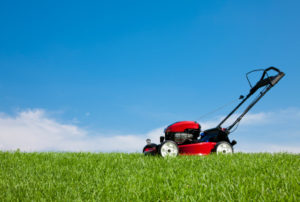 these Five things. We did.

1. Neighbors, seriously. By now you’ve all heard the story of how Rand Paul was attacked by his next door neighbor. It’s been reported that the cause was not political and likely personal. Sources are stating it was over yard maintenance. Leaves and lawn clippings, specifically. So we’re going to lay this out for you, as we suspect it happened. They’ve lived next to each other for fourteen years. Rand was mowing his lawn – apparently something he enjoys. Right there, that makes him suspect, but we’ll give him the benefit of the doubt. The neighbor observes him and the decade old grudge over property lines and just exactly whose tree those leaves fell from and whose grass has encroached on whose yard balloons in his chest. He can take it no more. He charges across the lawn like a bull elephant and tackles 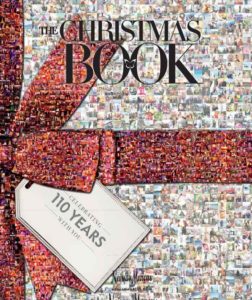 the unsuspecting mower. You know their wives are seriously eyerolling right now. Imagine if there’s been an incessantly barking dog.

2. Twas the month before Christmas… The Neiman Marcus Christmas catalogue came out and we rushed right over to find out what we are getting for Christmas this year. We love the fantasy gifts. This year Ava is looking forward to touring an emerald mine in Zambia with a master jeweler and a one-of-a-kind piece of jewelry with a 7.2 carat emerald. You’d think Amylynn would go for the duo of Rolls Royces, but this year she’s kinda intrigued by the bespoke handbags by Olivia Le-Tan. Don’t get us wrong, she’ll take the cars, she’s especially enthralled by the blue one (it’s her favorite color this week). But you know the Sister’s love purses. And they have good senses of humor. The best senses of humor. Nobody has a better sense of humor. And with none of 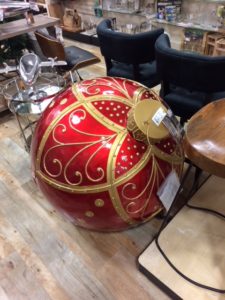 those presents do you need to know our sizes. Perfect.

3. Speaking of Christmas. All of the Christmas decorations are up in the stores. The Halloween stuff was whisked away at midnight on Nov 1st and the holiday crap appeared in its place like the displays grew from magic beans. We saw one particularly terrifying dancing and singing life-sized Santa at Home Depot that will provide some poor child a lifetime of therapy. Ava was in HomeGoods this week and found this enormous decoration. This one we liked. We hope you can discern the size of this thing by the surrounding objects. It’s GIANT. It was $399 so neither of the sisters 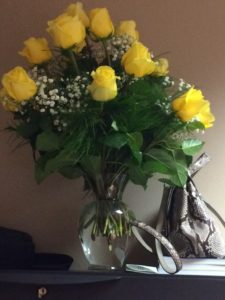 will be acquiring it anytime soon. No one needs a $399 Christmas ball but Ava is kinda desperate to possess it. Besides, the cats would just break it.

4. Flowers from your boss. Sometimes, when you least expect it, happiness comes from an unexpected source. Take this amazing bouquet of yellow roses, for instance. They were sent to Ava for the wonderful job she is doing in her new-ish position. Nice to be appreciated!

5. They really should earn their keep. We wanted to tell you the story about an 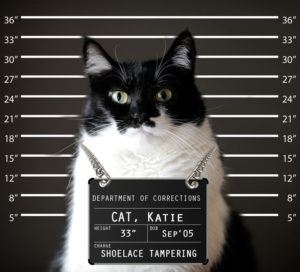 83-year-old woman in Ohio who trained her 65 cats to steal jewelry from her neighbors. In the story we later learned was a hoax, her cats had managed to steal $650,000 worth of baubles from the neighbors. We really wanted this to be true. It made us think for a moment that our cats had real possibilities. Sadly, according to Snopes, it was all fabricated. But the Snopes article was almost as amusing. The hoax news story reportedly used the mug shot from a different story — a 92-year-old Floridian woman who shot at her neighbor for refusing to kiss her. Apparently he never could figure out why she was so attracted to him. So, our cats are still hopeless freeloaders with no plan to make themselves useful.