What a weird week it’s been. All kinds of odd news – there was so much to find amusing this week it was almost too hard to limit it to five! What an excellent change of pace, huh? Sit back and enjoy this weeks five things…

1. Fabulous Libyans. The following was chanted by Libyan rebels to mock their leader, Muammar Gaddafi: It’s over, Frizzhead. Isn’t that great? At once it’s so childish and yet, we don’t know, it’s so spur of the moment. Do you 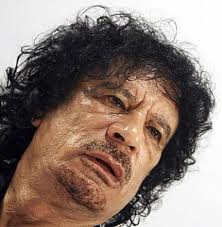 think Gaddafi found this playground taunt threatening in any way? Probably not, but we like it. If Gaddafi wasn’t such a dick, the Sisters would recommend an excellent, affordable hair dresser and maybe a good leave in conditioner.

2. Japanese money. Wow! Are the Japanese honest or what? After the disaster of the earthquake and the tsunami, the Japanese people have returned almost 6,000 safes holding around 78,000,000 dollars. Of course, it’s actually 2.3 billion in yen. We can’t imagine what the Japanese would be doing with 78M in US dollars in their safes. Honestly, the place to lose anything is in Japan.

seperate from his family where he keeps his books, posters and art work. The Sisters are 100% positive this became necessary because the short people in his house wouldn’t stop touching his stuff. The Sister’s have been trying to figure out how they could get their own apartment for months now. We figure a nice townhouse in the middle of town would work. There are only a few requirements. It wouldn’t necessarily have to be big because we may not always be there together nor all the time. Just a few nights a week or maybe once week a month – just when you need a break. Or like one sad, sweaty Sister – when she needs some air conditioning.

just imagine it in gold - sigh

4. Shoe sales. Short of a crazy sale at a bakery or wild bargains at a book store, a shoe sale is the best thing in the world. This week it was at Dillards. An additional 60% off the clearance shoes makes a Sister squeal. These particular shoes came in a lovely mulberry, a stunning silver, and jet black with crazy zipper flowers. Eeeeee! Schlick – that’s the sound of a Visa card sliding out of a wallet. Happiness abounds. Except for the one Sister who meanly refused to allow another Sister to buy a gorgeous pair of Michael Kors gold leather wedge sandals for 30.00 just because Sister #1 insisted Sister #2 wouldn’t be able to walk in them. Sister #2 is still pining after them.

5. Crazy news. We already discussed with you the crazy bodiless shoes in Vancouver, British Colombia. In Illinois a man wandered into his garden for some broccoli and found a bag with $150,000 in it. He called the police who then wandered around among the greenery some more and discovered another bag with $150,000. The police have no leads but they suspect the money was from a criminal endeavor. In an absolutely brilliant example of police work, they left a business card with a note written on the back to please call the police

imagine this at 8 feet long

station then they kindly left a phone number. How does that note go? “Dear criminals, missing anything? Love, the Police.”  Then in Norway, a man dressed in a black leather coat and hat stole an 8 foot whale tooth from a museum. The only other information they have on the man was the fact that he and the tooth ran off with a large, white dog that he’d left outside. All three of these stories have been making the Sisters wonder if perhaps these stories are so absurd because they are written in code by the CIA. Or maybe they are fraternity pranks. Especially the tooth business with the giant dog. All we know for sure is that this crap probably doesn’t go on in Japan.