Finish What We Started – Free Sample 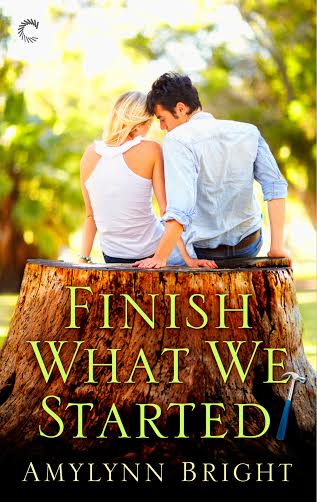 “I definitely don’t remember putting it down, it was just so easy to get caught up in the characters–” Homelovebooks blog

Literally, crap. Lee Bennett cursed, then scraped the sole of his work boot on a curb. How had he missed that pile of dog poo? It was like Godzilla had passed through the parking lot.

He raked his fingers through his hair, making himself presentable to meet with his client. He grabbed his clipboard and a manila folder, then slammed the door to the truck’s cab. He skirted another pile of dog poop. Probably an occupational hazard at a veterinary office. He held the door open for a tiny old lady holding a tiny brown dog.

The lobby of All Creatures Veterinary Clinic was loud. And hairy. Lee suppressed a sneeze as a hunk of yellow dog hair floated past his face. He waited by the tall counter as the elderly lady signed in her wee brown dog—or squirrel, honestly it could have been either, it was so small. There was also a woman with a box of gray-striped kittens, a man with something very mysterious rolling around inside a tied pillowcase, and a young guy with a dog the size of a musk ox drooling on a leash. The last one was probably responsible for the poop in the parking lot. What the hell did his owner feed an animal that big? Truant children?

“Can I help you?” The receptionist looked over the counter, trying to spot his animal.

Oh, no. No animals for him. Pets seemed like so much trouble. “Hi. I’m here to see Dr. Claesson about the new clinic.”

“Oh right. He’s expecting you.” She stood up and walked to the door that led to the back. “Why don’t you follow me?”

She led him down a hallway, past a closed door that muffled a feline yowl followed by an alarming thump, and into an office. “You can wait here. He’ll be right with you.” She met his gaze and gave him a full-wattage smile. He gave her a friendly nod. Picking up a girl here, of all places…It wasn’t going to happen.

He wandered around the room and read the diplomas on the wall. There were pictures of Dr. Claesson with all kinds of animals, cats, dogs, horses…A giraffe. Whoa, sure as shit, there was the vet with a damn giraffe. Cool.

He stepped over to the book shelf. Nothing there but reference books and stuff. On the desk sat a photo of the man’s family taken about fifteen years before, based on the clothes. Dr. Claesson had a pretty blonde wife, five handsome blond sons and one gorgeous blonde daughter who had almost been Lee’s wife.

The room was stifling all of a sudden. He plucked at the front of his shirt and told himself to calm down. Taking a seat in front of the desk, he pulled the blueprints from the folder. He spread the papers out, then scanned them for the millionth time. It was a fairly standard layout: big lobby, five exam rooms, surgery, office and boarding kennels in the back.

This wasn’t the type of job he normally preferred, but it was going to be a quick one and the money would allow him to take other, less lucrative jobs that would require more creativity. Besides, he hadn’t been able to figure out a way to graciously say no.

“Lee,” Dr. Claesson said his name in a good-natured bellow as he walked in and shut the door. “How are you today?”

He stood and shook the veterinarian’s hand. “Afternoon, Doc. I’m good. You?”

“Eh,” the doctor said with a smile. “It’s always a good day when I’m not wearing Band-Aids.”

Lee chuckled. “In my line of work, we just close up cuts with some duct tape and move on.”

“Right. But then again, your customers probably don’t bite you on a regular basis.” The doctor took a seat behind the desk. “Are these my plans?”

“Yes, sir.” He leaned over the desk with one hand and pointed to the drawings. “Here is the lobby, exam rooms here on the left, passage along there is the lab and an operating suite, and an office right here—” Lee touched the paper on the far side, “—in the back.”

Dr. Claesson smiled. “That looks great. And you put in the electrical requirements I mentioned?”

“Yep.” Lee reached behind him for the folder and pulled out a typed sheet. “Here are the changes in the estimates. Nothing big.”

The doctor nodded. “Fine, fine. When do we get started?”

“Permits will be ready by the end of the week. Grading will sta—”

The door to the office opened and an agitated female was already talking a mile a minute as she strode into the room. “Dad, I’m not taking Mr. Phillips anymore. There’s nothing wrong with that cat of his. I’m telling you, he just wants to hit on me.”

Candace Claesson. Lee could only stare.

She spotted him and came to a quick stop. “Oh.”

“Lee is doing the construction on the new site.” The doctor was busy going over the estimate sheets and paid no attention to the silence that sucked the air out of the rest of the office.

She was still the most heart-stoppingly lovely woman he had ever seen. Her butter-yellow hair was pulled back in a long braid. He wanted to ask how she’d been. If she was happy. Was she seeing anyone? He wanted to snub her. Or call her a witch, then wrap his arms around her and kiss her until they both couldn’t breathe. Instead he snapped his jaw closed and looked at his paperwork.

“I’m sorry.” She shifted her gaze to her father. “I didn’t know you had someone in here.”

Someone? He was just someone these days?

“He’s here to finalize the contracts. Construction starts next week.” Her father looked up from the paperwork. “Want to see what it’ll look like? Where are those renderings you emailed that last time, Lee?”

“Uh, right here, Doc.” He found them in the folder with the permit applications and receipts. He handed them to Candy. “I didn’t know you were back.” If he’d known, he would have been prepared. Or maybe he wouldn’t have taken this job in the first place.

Long, slim fingers took the mock ups. She made brief eye contact with him before she bent her head to the sketches. Her eyes were such a vivid blue, he’d often thought he couldn’t have been remembering them right. No one had eyes like that. No one but Candy.

“I just got back about two months ago.” She flipped the pages in her hand. “This is nice, Dad.”

“I’m glad you came in,” he told her. “You really should be here, since you’re going to be Lee’s point person.”

Candy’s head whipped up and she glared at her father. “Point person?”

Dr. Claesson continued to look over the estimates, running a finger down the long column. “Paint, tile. All that stuff. You know I can’t tell what will look good, and you might as well pick stuff you like.”

She turned her whole body away from Lee to address her father in a stern voice. “Dad, I don’t think that’s…Um, I think Mom would be better for that.”

Lee’s brain caught up to the conversation. He was going to be seeing a lot of her, then. It was too late to get out of it now. This seriously complicated an easy construction job.

Her father folded the plans and handed them back to Lee. “It’s your clinic to run, Candace,” he told her in a fatherly tone that easily translated into “stop being a brat.”

Lee gathered his paperwork and folders and extended his hand to Dr. Claesson. “I’ll talk with you next week, sir.” He turned and offered a business card to Candy. “It was great to see you again. Call me if you have any questions about the construction.” He gave her a wide, friendly smile that he hoped said that it was nice to see her and absolutely nothing else.

She gave him her fake beauty-queen smile. “You too. And I will.” She indicated his card.

Lee was tapping his brother Mark’s number with shaking fingers before he even made it outside the building. “Dude!” he yelled into the phone. “You are never going to freaking believe who I just saw. I am so fucked.”

“Daddy.” Candace looked at her father. “How could you hire Lee Bennett to build the new clinic?”

Her father’s chair squeaked as he leaned back. “He has a great reputation. Besides, we know him. I won’t have to worry he’ll cheat us.”

She shook her head. “We don’t know him anymore.” Maybe she’d never really known him at all. Or she’d known him too well. Whichever it was, she didn’t want to know him now. She didn’t hate him anymore, but seeing him again when she hadn’t been prepared left her feeling prickly and antsy and a little sad. Now she was stuck with him until the clinic was finished. Fabulous.

Her father rolled his eyes. “You don’t stop knowing someone just because you stop dating them.”

She found it improbable that his personality had changed in any significant way. Being an unbearable asshole was sort of a lifelong occupation.

When she’d graduated from her veterinary program in Scotland and come back home, she’d done a quick internet search, just in case, and found out he hadn’t moved away. But it was a big city, and it had seemed possible they might never cross paths. The Lee she’d known moved in small circles that revolved around his family, bars, and sporting events. Her search had revealed several articles about his business in the local paper including office-building openings, an art gallery and charity work. His company sponsored a Little League team.

The worst part of it was he looked great. No, he looked sexy as hell. Five years ago, Lee had been hot in his blue jeans and baseball caps, working construction jobs.

Today, though, he had a business card and blueprints to accompany the jeans.

He still looked mighty fine in them, too, damn him. He had matured past the boyish charm that had been so attractive at twenty-seven and into a more sophisticated handsome. His face was leaner, his cheekbones more defined, but those green eyes looked exactly the same. Candy had felt an unexpected pang of…what? Loss? Regret? Maybe she would feel better now if she’d clobbered him over the head with his stupid blueprints.

The card in her hand said Bennett Construction and his phone number, thick black printing against a field of cream. Very responsible looking. Why she’d think his business would be anything but, she didn’t know. A lack of responsibility had never been his problem.

Well, she only had to see him a couple of times to iron out design details. No reason to freak out.

No reason at all.